After acting as a Key Partner of the Organisation for Economic Co-operation and Development (OECD) for approximately 10 years and taking part in several bodies, projects (such as the Base Erosion and Profit Shifting – BEPS project) and legal instruments over the years, Brazil presented a formal request to join the OECD on 29 May 2017.

Although the criteria adopted by Brazil has a relatively straightforward application, most often than not, Brazilian transfer pricing rules do not necessarily result in arm’s length prices due to use of predetermined profit margins (which can amount to 40% for certain activities).

In addition to the use of fixed margins, Brazilian transfer pricing rules deviate from the OECD Transfer Pricing Guidelines in the following main aspects: 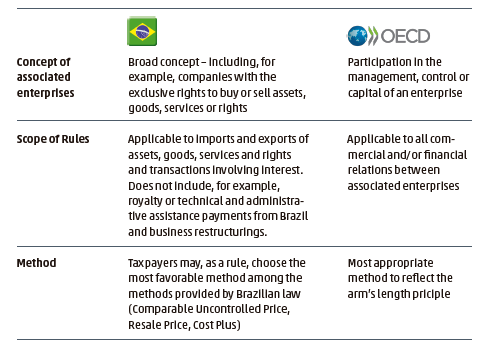 Although it is still uncertain as to whether the OECD will accept Brazil’s request to become a member of the organisation, if approved, the accession process could require a substantial change to Brazilian transfer pricing rules.

As evidenced above, the main challenges that Brazil could face to ensure the application of the arm’s length principle by Brazilian taxpayers could be the elimination of fixed profit margins under the Cost Plus and the Resale Price methods, the adoption of a comparability analysis, the application of the Transactional Net Margin and the Profit Split methods, the implementation of the master file provided under BEPS Action 13 and the adoption of the corresponding adjustments under Double Tax Treaties, among others.

Conjunto A – Bloco A